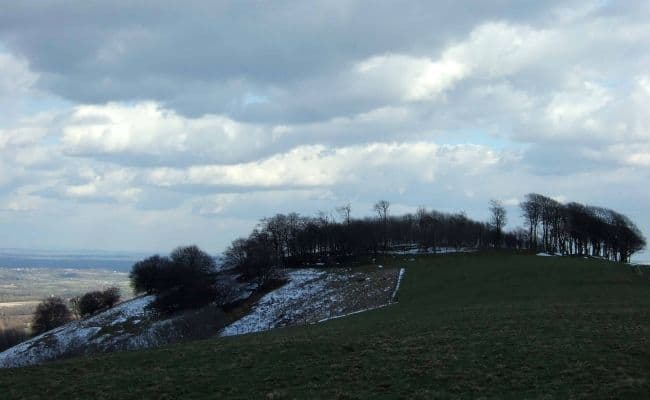 Blunden started writing poetry at school. His first poem was published in the school magazine The Blue in February 1913. By October 1914 he had 44 poems to his name and he took them to a private printer – Mr. Price of Horsham, Sussex. 100 copies were printed at sixpence each.

In March 1916 50 copies of his poem ‘The Barn’ were printed privately by J. Brooker of Uckfield, Sussex. We show a verse below.

‘By Chanctonbury’ was published in Pastorals by Erskine Macdonald, London, in June 1916. It is included in Edmund Blunden Selected Poems edited by Robyn Marsack and published by Carcanet 2018.

We shuddered on the blotched and wrinkled down,
So gaunt and chilled with solitary breeze.
Sharp stubborn grass, black heather-trails, wild trees
Knotting their knarred wood like a thorny crown –
Huge funnelled dips to chalklands straked with brown,
White railway smoke-drifts dimming by degrees,
Slow ploughs afield, flood waters on the leas,
And red roofs of the small, ungainly town:
And blue fog over all, and saddening all –
Thus lay the landscape. Up from sea there loomed
A stately airship, clear and large awhile:
Then gliding grandly inland many a mile,
It left our Druid height that black groves plumed,
Vanishing fog-like in the foggy pall.

Rain-sunken roof, grown green and thin
For sparrows’ nests and starlings’ nests;
Dishevelled eaves; unwieldy doors,
Cracked rusty pump and oaken floors,
And idly-pencilled names and jests
Upon the posts within.
The light pales at the spider’s lust,
The wind tangs through the shattered pane:
An empty hop-poke spreads across
The gaping frame to mend the loss
And keeps out the sun as well as rain,
Mildewed with clammy dust.
The smell of apples stored in hay
And homely cattle-cake is there.
Use and disuse have come to terms,
The walls are hollowed out by worms,
But men’s feet keep the mid-floor bare
And free from worse decay.