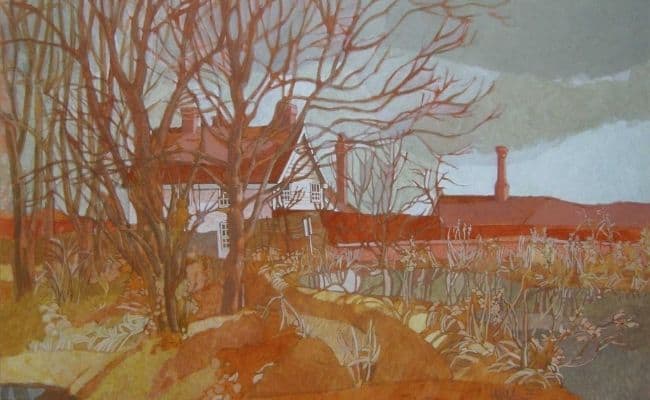 After his return from Hong Kong in 1964, Blunden wrote his final poems before ill health overtook him in 1970.

‘A Swan, A Man’ and ‘Ancre Sunshine’ are taken from this publication.

Among the dead reeds, the single swan
Floats and explores the water-shallow under,
While the wet whistling wind blows on
And the path by the river is all alone,
And I at the old bridge wonder
If those are birds or leaves,
Small quick birds or withered leaves,
Astir on the grassy patch of green
Where the wind is not so rough and keen.
What happens to my thought-time,
To my desires, my deeds, this day?
The rainstorm beats the pitiful stream
With battle-pictures I had hoped to miss
But winter warfare could be worse than this;
Into the house, recall what dead friends say,
And like the Ancient Mariner learn to pray.

In all his glory the sun was high and glowing
Over the farm world where we found great peace,
And clearest blue the winding river flowing
Seemed to be celebrating a release
From all that speed and music of its own
Which but for some few cows we heard alone.
Here half a century before might I,
Had something chanced, about this point have lain,
Looking with failing sense on such blue sky,
And then became a name with others slain.
But that thought vanished. Claire was wandering free
Miramont way in the golden tasselled lea.
The railway trains went by, and dreamily
I thought of them as planets in their course,
Thought bound perhaps for Arras, how would we
Have wondered once if through the furious force
Murdering our world one of these same had come,
Friendly and sensible – “the war’s over chum”.
And now it seemed Claire was afar, and I
Alone, and where she went perhaps the mill
That used to be had risen again and by
All that had fallen was in its old form still,
For her to witness, with no cold surprise,
In one of those moments when nothing dies.