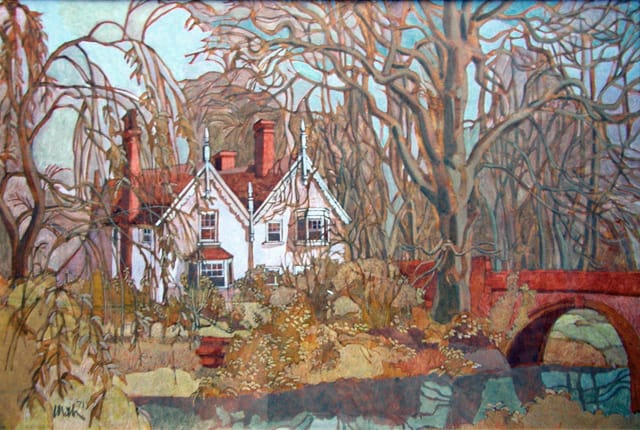 In 1964, after eleven years of living and teaching in Hong Kong, Edmund Blunden and his family moved back to England. Edmund’s eldest daughter by his first marriage, Clare, lived in the county of Suffolk, and she helped him to find the new family home, near to her in the Suffolk village of Long Melford.

Life in Long Melford was a world away from life in Hong Kong and was certainly a shock to the system for Blunden’s four daughters, who had grown-up in the Far East. However for Edmund it felt more like home. His return from WW1 was to Suffolk and it was in this county that he first fell in love with his first wife Mary who was a Suffolk girl. It was also in Suffolk that his first born child was buried. He had many family connections there. He had spent his childhood in the Kent village of Yalding where he enjoyed village cricket, singing in the church choir and exploring the surrounding countryside. Long Melford offered him village life again and so he settled in quickly, writing a new guide to the church within months of arriving and establishing himself as a local in the nearby pub, The Bull.

The Blunden house was the old mill house, built next to Melford Hall, and was called ‘Hall Mill’. Edmund established his study in the outhouse where he could work undisturbed. Occasionally he would take a break from writing articles, book reviews or preparing for talks and lectures, and wander down to the mill-pond to look out for fish. Life seemed set to be much calmer. 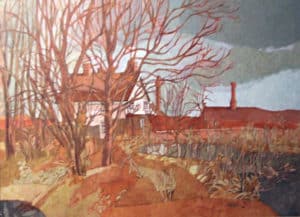 In 1971 Blunden’s eldest daughter Margi and her husband Mark, an American artist, came to live at Hall Mill. Mark, fell in love with the Suffolk countryside describing it as “atmospheric, subtle, filled with beautiful light”. He also loved Hall Mill particularly, it seeming to be “organically integrated with its surroundings… as much natural as man made”.

Mark Miller was born in rural Pennsylvania and trained at the Philadelphia College of Arts and Temple University. As an artist he was never much interested in American landscape, feeling as if it had no clear tradition, and

because of its vastness he found it difficult to distill local, distinctive landscape on a single canvas. Coming to England gave him a new muse – the landscape. He found this country to contain “more diverse and inspiring landscapes than perhaps anywhere else in the world”. His English influences include Cotman, Crome and particularly Turner for his use of “wonderful colour and light… and of course Constable for the way that he captured the essence of landscape, especially that of Suffolk”.

Blunden was always an admirer of art and of watercolours in particular. His knowledge of artists, particularly those of the period of the Romantic poets, was far reaching and he was always on the look out for paintings by Victorian artists whether they were known or not. Hall Mill housed an inspiring collection.

Mark enjoyed painting Hall Mill particularly because of the way its various parts and outbuildings seemed to grow naturally out of its Georgian centre. Many of these paintings survive and now hang on the walls of Blunden and Miller family homes. 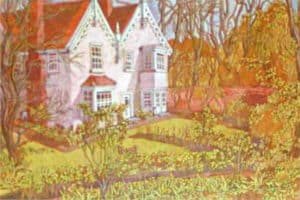 Although from two different worlds – the artist, a young American inspired by “Pollock, Rothko, de Kooning and Motherwell, and the beginnings of the 1960’s ‘hippie’ revolution’” and the poet, an aging, retired English professor who once sung ‘”of the rivers and hamlets and woodlands of Sussex and Kent” [from his Poem The Premable] they shared a love of the Suffolk countryside.

We’ve featured Mark’s favourite of his Hall Mill paintings in this blog. He liked it most because he “was able to combine the house with the stream, trees and bridge in a very intricate and atmospheric composition. In fact, he liked all the paintings he did of Hall Mill feeling they captured “the historic and organic qualities the house through a combination of composition, atmosphere and the history contained in the subject”.

Mark and Margi moved out of Hall Mill in 1972. Edmund was to live there for two more years. He died on January 20 1974 in his bedroom in Hall Mill overlooking the river. Mark’s paintings are a beautiful, striking reminder of Blunden’s last home and return to the quintessential English village that he loved so much.

By Amy Budd, daughter of Mark Miller and Margi Blunden